This blog post is the culmination of an idea that Sanne (Grinovero) floated to me during some lunch, back at a time when we, remote engineers, would occasionally meet face to face and have the opportunity to share ideas spontaneously. I’m unsure if the lunch was in Neuchâtel or Barcelona, but essentially Sanne was diagnosing an issue and he struggled with GraalVM’s native image analysis call tree text output. He wondered whether that data could instead be formatted differently and imported into a graph database for easier inspection. I’m happy to announce that the GraalVM and Mandrel 21.3.0 releases include improvements to address this particular issue.

Essentially, they bring much needed improvements for analysing code paths that get included in the native binary. Debugging these code paths aims to answer questions such as:

why does this code path get included in the native binary?

These code paths can be optionally reported when enabling printing of the analysis call tree. With Quarkus, this is achieved by passing in the -Dquarkus.native.enable-reports option.

Before 21.3.0, when Quarkus instructed a GraalVM distribution to print out the call tree, the resulting output would be a single text file representing the call tree in a custom tree format. This text file would contain a lot of duplicated information and could be as big as several gigabytes in size.

GraalVM 21.3.0 introduces the possibility of representing call trees as CSV files instead of a single text file. These CSV files contain method information and different connections between them (e.g. direct calls, virtual calls, overrides, etc). One immediate benefit is that there’s no information duplication, so the CSV files can be several times smaller in size compared to the corresponding text file. In some situations, they can be as much as several thousands times smaller. However, the main reason why this feature was implemented was to make it easier to feed the call tree to other tools, like graph databases such as Neo4j. Once imported, a user can execute graph queries over the call tree, which makes it easier to extract relevant information and answer questions like the one above.

In this blog post, you will learn how to:

This blog post uses the Quarkus Hibernate ORM quickstart as a sample Quarkus application. Download the application and execute:

The above command will generate a native binary and the CSV files mentioned above.

Next, start Neo4j in a container:

Once the container is running, you can access the Neo4j browser via http://localhost:7474. Use neo4j as the username and the value of NEO_PASS as the password to log in.

You can download the cypher script from this link or copy and paste it in a file called import.cypher.

Next, copy the import cypher script and CSV files into Neo4j’s import folder:

After copying all the files, invoke the import script:

Once the import completes (shouldn’t take more than a couple of minutes), go to the Neo4j browser and you’ll be able to observe a small summary of the data in the graph: 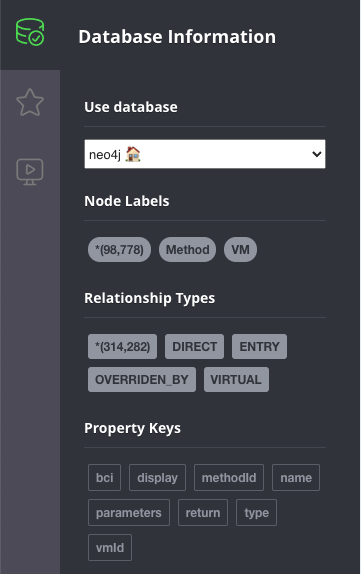 Next, let’s try out some cypher queries to explore the call graph. I don’t know anything about the Quarkus application itself, but given it’s a Hibernate ORM application, I can assume that some sort of persist method will be called. Go into the browser and type a query for this: 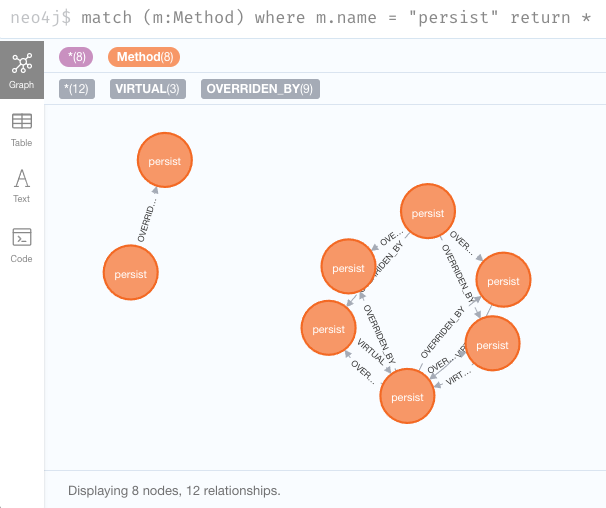 We got some hits, but the default style for the nodes presented is not very readable. We can however tweak the stylesheet as shown by this guide. Two useful modifications for this use case is to increase the default node diameter value to say, 150px. The other modification is to switch node.Method caption value to "{display}".

Let’s repeat the query after modifying the browser style and moving the nodes to clearly view them: 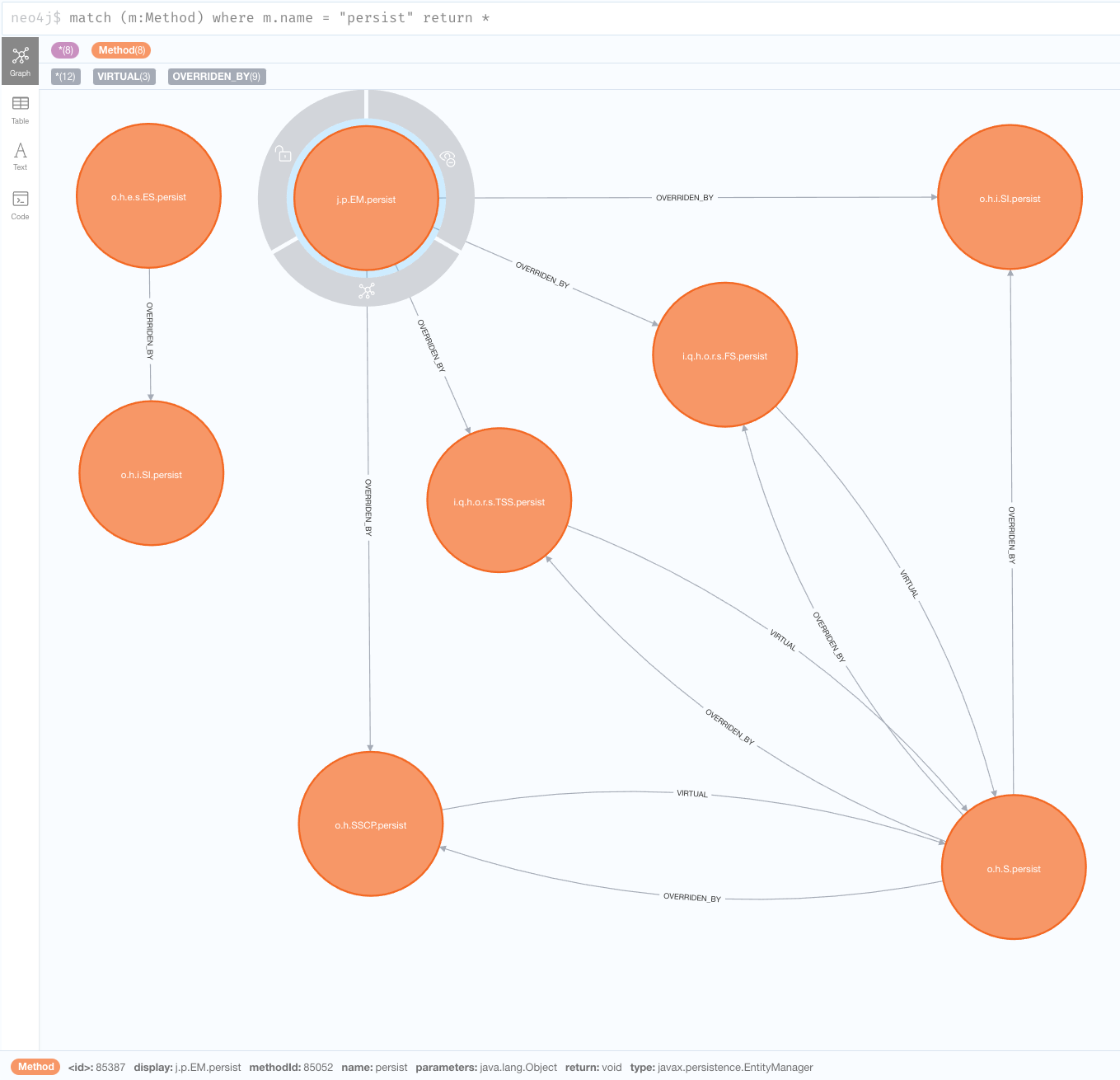 We can see above that one of the persist is to javax.persistence.EntityManager. This is the JPA method for persisting entities and the one we’ll be exploring further. Let’s narrow the query down to that one to have a clearer view:

Note that if we hover over the node we get information about the method itself.

Going back to the original question, we wanted to find out why a given code path gets included. One way to do it is to start by the method itself, and then walk backwards to find what links (e.g. direct calls, virtual calls, overrides…​etc) exist to that method within a certain depth. For example, let’s try to find what other methods have a direct link to the persist method:

Next, let’s expand the query further and try to find all links with a depth of 2 to the persist method: 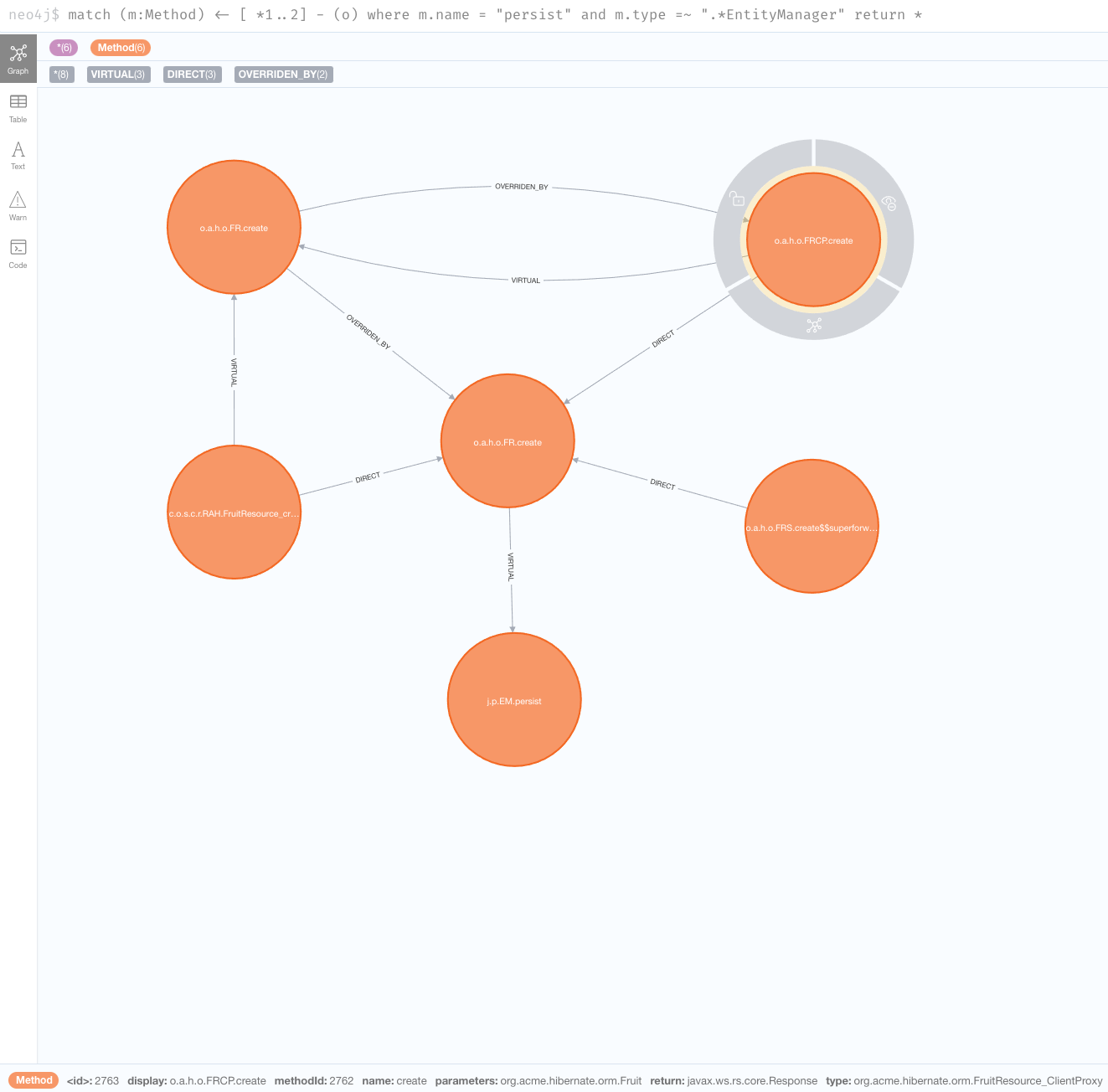 If we query for a depth of 3, we’ll find that the reflection access is an entry point. So, we’ve found the shortest path to the persist method, but that’s not necessarily the only path: 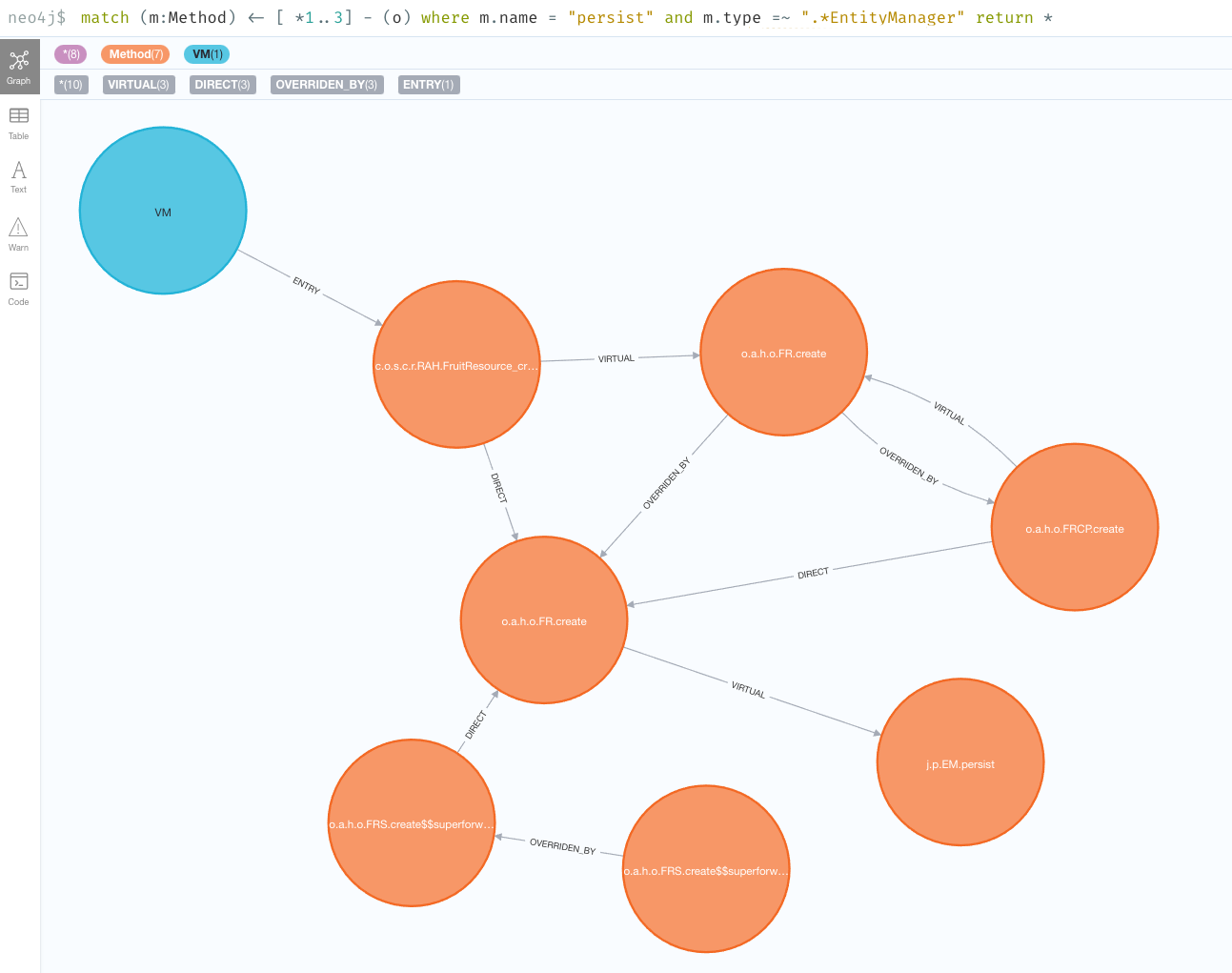 You can continue going up layers, but unfortunately if you reach a depth with too many nodes, the Neo4j browser will be unable to visualize them all. When that happens, you can alternatively run the queries directly against the cypher shell. E.g.

After you are done with the exploration don’t forget to shut down (kill) the testneo4j container:

Note that this will also remove the container (since we used --rm when we created it).

We’ve only just started exploring the possibilities of Neo4j for this use case, and so we still have to learn all the tips and tricks to make the most out of it. As we learn more we’ll share any tips or query templates with the community.