Starting with Quarkus 2.13.6.Final, the native runtime garbage collection policy switched in order to provide more consistent and predictable runtime performance. This blog post tells the story of this switch.

Sometime in 2022 while carrying out some native runtime performance benchmarking we observed that, in constant load plain text benchmarks, memory consumption would grow continuously until it reached around 500MB and then it would drop. The memory consumption graph would look something like this: 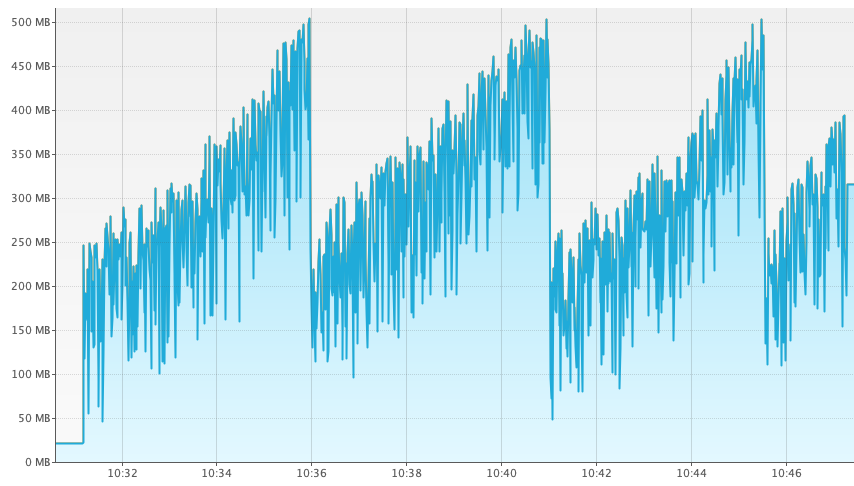 The first thing we wondered was, what this ~500MB limit was and where it was coming from. To do that, we enabled GC logging to see if we could get some clues:

We realized that this number is actually 512MB, which is the default minimum heap size GraalVM configures when the maximum heap size is anything above ~3GB of physical memory.

The next question was, why is there a relationship between the minimum heap size and the memory consumption at which a full GC appears to happen? Looking at the output above, on our system the default maximum heap size is 25.6GB. GraalVM defaults the maximum heap size to 80% of the physical memory if no specific configuration is passed, and indeed 25.6GB is 80% of 32GB. It would seem odd to do a full GC when 512MB have been consumed, given that our system has given it a maximum heap size that is far bigger. The answer was found in the GC policy Quarkus was explicitly configuring.

One option (1) for doing a full GC would be when it estimates that the used heap will exceed maximum heap size, but that wasn’t our case. The other (2) would be if enough minimal collections had happened and the used heap was above the minimum heap size. This latter option was what was happening here.

At this point we thought, do the assumptions made about the default GC policy still apply in 2022? So, we removed the GC policy configuration tweak, repeated the test and we observed the following memory consumption: 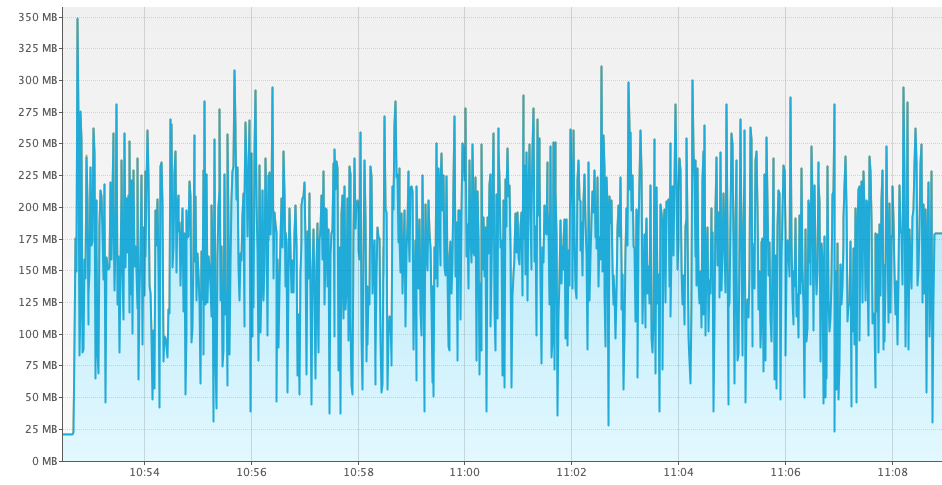 For the same workload the default GC policy, called "adaptive", consumed close to 50% less heap compared to the "by space and time" one. Note, however, that these graphs alone are not enough to make the switch since we could have a situation where "adaptive" is using less memory because the overall throughput is less. So, let’s look at the benchmark that generated the graphs above and see what throughput numbers we obtain. Using Hyperfoil, the "by space and time" policy reported these numbers on our environment:

And here are the numbers for the "adaptive" policy:

For the same workload, the throughput obtained with the "adaptive" policy is within 1% of the one obtained with the "by space and time" policy. So getting pretty much the same throughput with "adaptive" as with "by space and time" and close to 50% less memory consumption, made it a pretty convincing argument to switch to the "adaptive" GC policy as the default for Quarkus, as it was already the case for other GraalVM.

We often see tests or benchmarks run with no -Xmx configured, in which case as stated above, the maximum heap size is set to 80% of the available physical memory and this heap size can easily exceed 3GB on modern hardware. These users would see better out of the box experience with the "adaptive" GC policy.

So, starting with Quarkus 2.13.6.Final, the GC policy for Quarkus native applications was aligned with GraalVM’s default, called "adaptive". It is still possible to set the GC policy back to "by space and time", should that work better in a specific case. This can be useful to do if you observe a regression with this GC policy change in your own Quarkus application. To do so, pass in:

More details on the investigation carried out can be found in the original GitHub issue. As a result of this work, we have also enhanced the Quarkus Native Reference Guide to add a Native Memory Management section. This new section should help Quarkus Native users understand how memory management works and how to get the most out of it.