Blog Mutiny and the Reactiverse

I had the question multiple times: how do I use Eclipse Vert.x in Quarkus? Indeed, you can use Vert.x in Quarkus. You can deploy verticles, communicate with the event bus, or use anything from the Vert.x ecosystem. But, you can also use the Mutiny variant of Vert.x in Quarkus, and get a seamless experience with the other reactive APIs offered by Quarkus. Several posts have already mentioned this, but it deserves a specific blog post. So, here we are.

As you may know, Quarkus is based on Vert.x. Under the hood, there is a managed Vert.x instance that powers the rest of Quarkus. 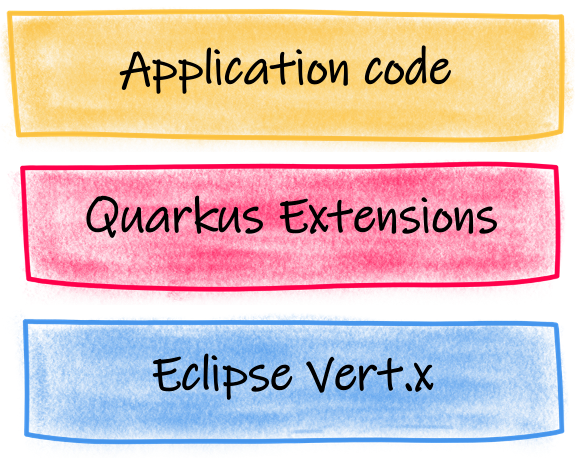 When Quarkus serves a HTTP endpoint, under the hood, there is a Vert.x HTTP server handling the request and response. That’s also true for messaging, gRPC and almost any I/O.

The Vert.x "bare" API and friends

Vert.x provides multiple APIs. Let’s focus on the "bare" one for now.

Following the reactive nature of Vert.x, the API contains mostly asynchronous methods. These methods are following a syntax convention:

The interesting part is the last parameter. It’s a function, a callback to be more precise, that gets called when the operation completes or fails. Indeed, the asynchronous nature of Vert.x does not allow using try/catch blocks. So you need to pass a continuation callback, invoked with the outcome.

AsyncResult is a structure capturing this outcome. It contains the result (of type <T>) produced by the operation, or the failure if it failed.

This code reads a file, and as it’s an asynchronous operation, invokes the callback when the file is read. The readFile method reads the complete content of the file and accumulates it in a buffer. The callback receives the asynchronous result containing either the file’s content (ar.result()) or a failure. Vert.x invokes this callback when the operation has either completed or failed.

Vert.x also supports streams thanks to the ReadStream and WriteStream classes. A ReadStream represents a stream of data you can read. So you can attach a callback invoked on every item traversing the stream. A WriteStream is a data source. You can push items to a WriteStream. These items will be consumed by a ReadStream:

Why are these API shaping rules important? Vert.x does not provide a single API. The "bare" API presented above is just one of the proposed API. It also provides API in Kotlin, API for RX Java, and so on.

These APIs are generated. Vert.x provides a code generator that _ translates_ the Vert.x "bare" API into the other APIs. Because all methods are well-formed, the generator understands how they should be adapted.

The generated code exposes a different API; each method delegating to the "bare" API. Asynchronous methods and streams can follow different transformations, so the resulting API uses the right idioms.

Mutiny is an event-driven reactive programming library. It’s not related to Vert.x. However, we have written a code generator that generates the Mutiny variant for the Vert.x API:

The transformations are straightforward:

For example, the first example from above becomes:

The stream example from above becomes:

A bit more than this

The Mutiny variant does not only apply the rules exposed in the previous section. For asynchronous methods, it also provides:

Where can we find this API?

At the moment of writing, we only provide Vert.x core and Vert.x clients (MongoDB, Redis, Web client, Mqtt, and so on). We are extending the support to cover the full Vert.x stack.

To use the Mutiny clients, you need to add the right dependency to your project. Browse the list of dependency to pick the one you need.

For example, to you use the Mutiny variant of the Vert.x Web client, add the following dependency:

Once you have the dependency, just create the web client instance:

Vert.x 4 is coming soon! We are already working in Quarkus and the different satellite projects to migrate. With Vert.x 4, a new generator has been implemented (following the same code generation approach), paving the road to a smooth upgrade.