Blog Peeking at the streams

Peeking at the streams

Mutiny is an event-driven Reactive Programming library. Like other reactive programming libraries, it uses streams as the primary construct. These streams convey events, and your code processes these events. Most of the time, your code is only interested in item and failure events. But there are other kinds of events such as cancellation, request, completion, and so on.

It’s not rare that you need to look at these various events to understand better what’s going on or implement specific side effects. For example, you may need to close a resource after a completion event or log a message on failure or cancellation.

For each kind of event, there is an associated group providing the methods to handle that specific event: onItem(), onFailure(), onCompletion() and so on. These groups provide two methods to peek at the various events without impacting its distribution: invoke and call. It does not transform the received event; it notifies you that something happened and let you react.

The invoke method is synchronous and does not return anything. Mutiny invokes the configured callback when the observed stream dispatches the event:

As said above, invoke is synchronous. Mutiny invokes the callback and propagates the event downstream when the callback returns. It blocks the dispatching. 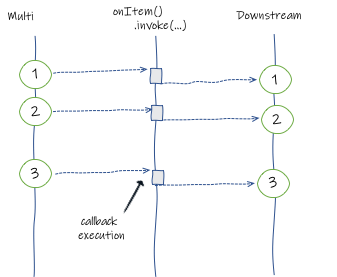 Of course, we highly recommend you not to block.

The following snippets show how you can log the different types of events.

The invoke method does not change the event, except in one case. If the invoke callback throws an exception, the downstream does not get the actual event but get a failure event instead.

Unlike invoke, call is asynchronous, and the callback returns a Uni<?> object.

call is often used when you need to implement asynchronous side-effects, such as closing resources. 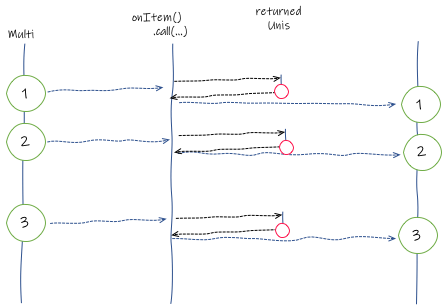 Mutiny does not dispatch the original event downstream until the Uni returned by the callback emits an item:

As shown in the previous snippet, you can use this approach to delay items. But the primary use case is about completing asynchronous actions:

Under the hood, Mutiny gets the Uni (by invoking the callback) and subscribes to it. It observes the item or failure event from that Uni. It discards the item value as only the emission matters in this case.

If the callback throws an exception or the produced Uni produces a failure, Mutiny propagates that failure (or a CompositeException) downstream, replacing the original event.

The invoke and call methods are handy when you need to observe a stream without changing the transiting events.

These methods are available for every kind of event in the associated group.