Blog Kafka - How to fail gracefully

Kafka - How to fail gracefully

Failures are inevitable. There is nothing we can do about that, and that also applies to Kafka applications. Your application may contain a faulty component misbehaving once in a while, or unable to process a specific Kafka record. In this post, we are going to see how we can manage these failures.

But, first, we need to explain how it works under the hood. When using reactive messaging, your application receives Messages. Even if your method handles payloads, there are Messages under the hood, and it unwraps the payload just before calling your method. 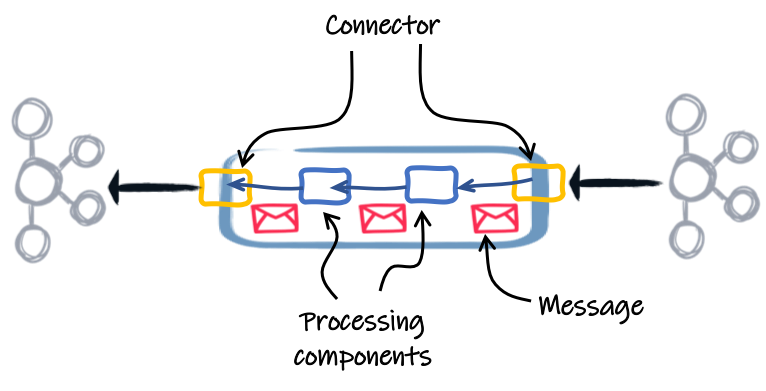 When the inbound connector receives the acknowledgment, it can act upon it and, for example, indicate to the broker that the message processing succeeded. In the context of Kafka, there are various commit strategies. We will cover these in a future post.

But as said earlier, failures are inevitable. For example, you may have a misbehaving component throwing exceptions, or the outbound connector cannot send the messages because the remote broker is unavailable. In these cases, the message is nacked, indicating that the processing failed. Similarly to successful acknowledgment, negative acknowledgment can be triggered manually (using the nack method) or handled automatically. For example, if your method throws an exception, the message is nacked. As with ack, nacking a message nacks its source, and the nack is propagated until the inbound connector:

It’s the responsibility of the connector to decide how to react in this case. The Kafka connector proposes three failure handling strategies, and that’s what we are going to detail now.

The first strategy is the simplest, but not sure we can qualify it with "smoothly." It’s the default strategy. As soon as a message is nacked, the connector reports the failure, and the application stops. If you use the health checks extension, the application is marked as unhealthy, and your orchestrator may restart the application.

But, it’s time to demonstrate it. I’ve created a simple application receiving movie titles from Kafka and failing (with an exception) if the title contains a ' or ,. You can check the code on this Gist, or run it using:

If you ran the application and check the log, you will see:

Now, if you open your browser to http://localhost:8080/health, you will see that the failure has been caught and the application is unhealthy:

This approach works well with sporadic, network-related issues. Still, if the source of the failure is your application code, you may enter a restart loop. Indeed, when the application restarts, it may again receive the message (the red one from the previous picture) that would produce the same failure again and again.

The second strategy is also straightforward: just close your eyes. When a message is nacked, it ignores the failure and continues the processing:

The log indicates the failure, but it continues the processing with the next one. You can only use this strategy if you don’t need to manage all the messages or if your application is handling the failure internally.

To enable this strategy, configure the channel with:

You can try this strategy with Gist, or run it using:

If you ran the application and check the log, you will see two exceptions:

Look at the last line. As explained, it continues the processing with the next message.

If you check the health of the application (using http://localhost:8080/health), everything is fine:

The dead-letter queue is a well-known pattern to handle message processing failure. Instead of failing fast or ignoring and continuing the processing, it stores the failing messages into a specific destination: a dead letter. An administrator, human or software, can review the failing messages and decide what can be done (retry, skip, etc.). Note that you can only apply this strategy if the ordering is not essential to the application.

You can, later, review the failing messages:

To enable this strategy, you need to add the following attribute to your configuration:

You can run the application using:

If you check the log, you will see the two expected exceptions and that all the titles are processed. You will also notice:

This log is written by the component reading the dead-letter topic:

Next time, we will talk about the commit strategies because failures are inevitable, but successful processing happens sometimes! Stay tuned!